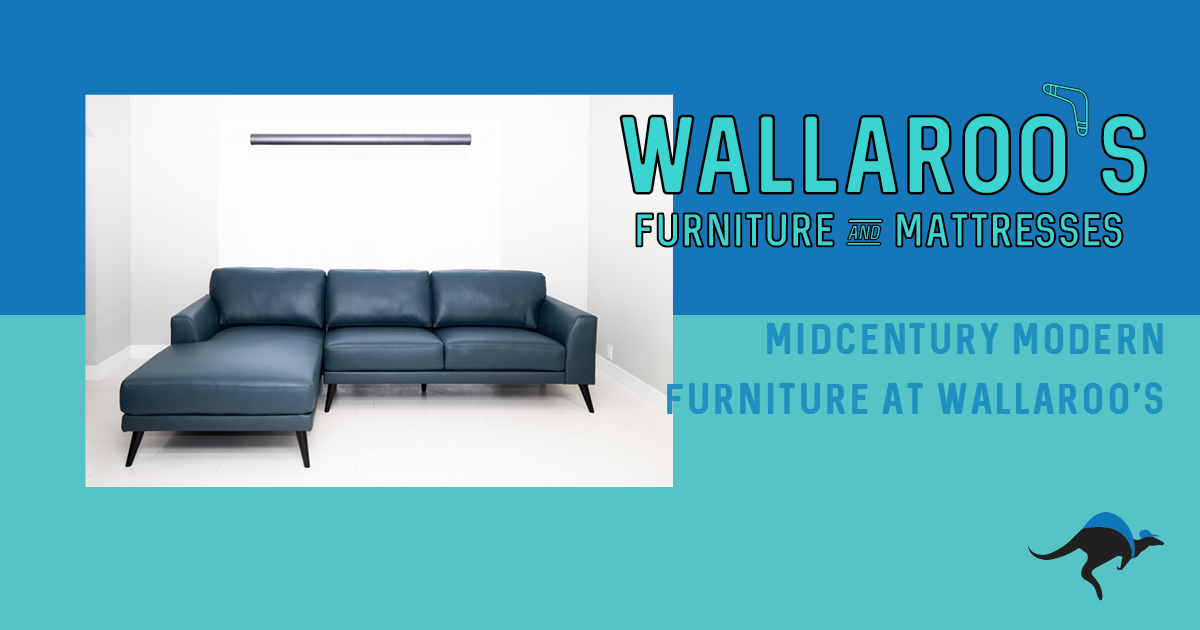 Is there anyone who doesn’t LOVE beautiful, functional pieces of furniture? We highly doubt it. If we ever meet someone that says, “Yes, I love ugly, useless furniture,” we’ll need to have a chat. But for the rest of the world, there’s Wallaroo’s line of Mid-Century Modern furniture.

You’ve likely heard the term “Mid-Century Modern” while talking about architecture and interior design, but you might not know how it relates to furniture. Follow along to read how Mid-Century Modern design principles guide us at Wallaroos!

The Origins of Mid-Century Modern Design

Often shortened to “MCM” (no, I’m not talking about “Man Crush Monday” on Instagram), this design movement came into fashion after WWII. It’s an American design movement sparked by Bauhaus architects from Germany who migrated to the States after the war. While Mid-Century Modern design has a retro feel, due to its heavy influence from the pop-art and space-age icons of the ’50s, it values the function and simplicity required for modern living.

Is Mid-Century Modern just a catch-all term for everything designed from the ’40s-’60s? No, it’s actually quite specific in its style and aesthetic. And it’s never been more popular. The movement is characterized by clean lines, geometric patterns, simplicity, and functionality. A Mid-Century Modern space will feature an open floor plan and large, sleek furniture.

The uncluttered, open feel of Mid-Century Modern spaces is due in part to new home-buyers’ desires post-WWII. In the ’50s, young families desired change. They want to move away from the overstuffed, ornamental, spaces they grew up in. Mid-Century Modern was, and still is, a refreshing change from designs of the past.

Mid-Century Modern pieces will forever have a place here at Wallaroo’s Furniture and Mattresses. The simplistic, to-the-point nature of Mid Century-Modern design makes it an excellent fit for Wallaroo’s. Our down-to-earth values and easy-going attitude coincide with those of Mid-Century Modernism. Sure, we have some pretty lofty goals in the Furniture game, but they’re always rooted in practicality.

MCM designers are a major influence on Bailee, Walalroo’s co-owner, designer, and Mid-Century Modern enthusiast. In particular, Herman Miller has been a major inspiration. Bailee had this to say about Herman Miller:

“I dislike chincey, extraneous detail on furniture, or anything really. Herman Miller was known for his office and waiting room furniture. He designed commercial furniture that needed to stand the test of time. It needed to look good while getting the job done. I want to bring the same principles and values to our customers.”

On top of filling her own home with Mid-Century Modern furniture, she regularly researches and designs new pieces to add to the Wallaroo’s family. And yeah, she’s owned a few Herman Miller pieces in her day.

The Jackie was Wallaroo’s first original Mid-Century Modern design. Featuring angled, solid wood legs, the Jackie has a sturdy base with a simple, clean design. The Jackie sofa is truly beautiful, but no part of it is embellished or unnecessary. Its simple, effective design needs no further embellishment. Though, we must say, the Teal version really pops.

The Wright is one of our best selling Mid-Century Modern designs.  Named after the famous architect, Frank Lloyd Wright, it has a functional, elegant design. It features a simple silhouette and to-die-for angled legs.

Frank Loyd Wright designed everything from churches to atomic family starter homes. We find his work anywhere and everywhere. In the same way, the Wright can find itself in a high-rise apartment, a waiting room, or even the sitting room of one of Spokane’s fabulous Mid-Century homes.

Mid-Century Modern Furniture and Our Mission

Wallaroo’s mission is to offer high-quality, beautiful pieces to everyone. There’s no exception for our Mid-Century Modern furniture pieces. We are continuously shopping around for the best deals for our customers, without foregoing quality materials. We strive to offer the best value of furniture in the PNW, and we certainly maintain that claim.

Our goal is for our customers to walk out with their new sofa and have no doubts about what they just purchased. We truly believe in what we sell, and that shows through to our customers as well.

If you’re interested in checking out simple, functional designs, swing by a Wallaroo’s near you today! We’ll help you find the perfect fit for your home, wherever you live.